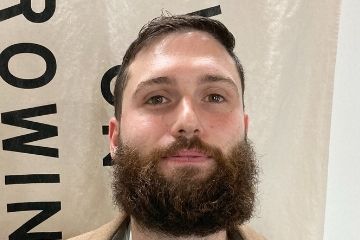 Ridge wallets launched via a Kickstarter campaign in 2014.  Ultra-thin, metal-clad, with RFID protection, the wallets are enormously popular in the U.S., with $50 million in sales in 2020 alone. Influencer marketing has driven much of the growth.

Sean Frank is The Ridge’s chief operating officer. He told me, “We sponsor a lot of influencers on YouTube. Roughly 750 in 2020, when we spent $3.9 million on 3,000 unique videos. That’s 10 new videos a day that we’re integrated with.”

Frank and I recently discussed the company’s process for managing influencers, as well as its founding, global growth, and, yes, selling on Amazon.

Our entire audio conversation is embedded below. The transcript that follows is edited for length and clarity.

Eric Bandholz: Tell us about The Ridge.

Sean Frank: We have one main product, the Ridge Wallet. We started on Kickstarter in 2014. Since then, we’ve sold probably 2 million wallets, and we launched bags, knives, and phone cases. But the main item is the Ridge Wallet.

Frank: It’s the smallest a wallet can get. It’s the size of a credit card with two metal plates on the outside made from premium materials — such as carbon fiber and titanium — with cool designs.

Prices range from $75 for an aluminum wallet to $175, which is our Damascus design.

Frank: Yes. We’re still growing at 50 percent year over year. We did $50 million in revenue last year. We’re not slowing down.

Bandholz: How do you grow a $50 million brand?

Frank: It takes luck. That’s the first part. Our CEO, Daniel, and his dad, Paul, started it. They put it on Kickstarter with no training or background. Paul was a special ed teacher for 35 years, and they just had a cool design. He’s now our semi-retired chief financial officer. Our company is entirely bootstrapped — no debt, no investors. Four of us have equity ownership. We have roughly 20 employees.

Bandholz: That’s $2 million an employee. It’s unreal. Are you stressed to the gills?

Frank: That’s the number we care about, the revenue per person. Public commerce companies are nowhere near that. Everyone here works really hard. I hope they’re not burned out. We don’t have investors. That simplifies our management. I do a lot of tasks. Daniel does product development. Paul still acts as our CFO.

Bandholz: Let’s discuss your influencer program. That seems to be a big chunk of building awareness for your company.

Bandholz: How do you protect your brand when using influencers and ensure that the price is right to be profitable?

Frank: We have two people on our team. Neither had done it previously. One, a female, worked at TikTok. She has a good Instagram following. So she’s familiar with the space. The other, a male, has been with us the longest. We look for fresh managers and then we train them.

Influencers want as much money as possible. Everyone does. But we’re transparent with the numbers that work for us. We’ll tell an influencer, “We’ve sponsored a lot of people. This is what we typically pay. We want to work with you. But if you don’t want to, that’s fine. No ill will.”

We’re industry agnostic. We will work with anyone. We’re a secondary income source for all those people. There are probably 50 accounts we’ve worked with for two years that consistently deliver responses. To them, it’s a guaranteed paycheck because they know they’re working with us, and they can budget around that.

Bottom line, influencer marketing is pay what you want.

A lot of brands think they know who their customer is — age, location, gender. We’re not that specific. If your channel is two-thirds English speaking and 50-percent men, there’s a good chance we want to work with you. That’s basically every channel on YouTube, incidentally.

After we get the demos, we determine a price per video. We look at their last 10 videos. Then we take a CPM number that makes sense to us. That’s typically in the single digits — $3, $5, or $7 per thousand views. Then we do some math and offer $250 a video or $300 or whatever.

Plus, we pay everybody up front. Then it’s hands-off afterward. Certainly someone could steal the money and leave. That’s happened maybe four times in the past two years.

Bandholz: Changing the subject, The Ridge is self-funded — growing through profits. What are your strategies for scaling to $100 million in annual revenue?

Frank: First, our marketing bucket would need to change. Ad costs are getting more expensive. Our CPMs on Facebook were up 100 percent year-over-year for most of 2020. YouTube pre-roll CPMs were up 300 percent. Thankfully we had pre-booked ad space at preset rates.

We’re going to hire two or three more people this year on our marketing team. There is an opportunity for us to go into Instagram; we’re going to start spending money there. We’re also going to spend money better on TikTok, Twitch, and Twitter.

Second, the operation side of the business would have to evolve for global customers. We are currently about 90 percent U.S. sales. We need to get more international. We launched localized online stores in Canada, the U.K., and E.U. with their own currency checkouts, payment options, and local inventory for quick deliveries. We hope to add Australia and Japan soon.

We’re on Shopify. We’ve duplicated all the stores and then localized each one. When I log in to Shopify, I have five accounts now.

Bandholz: Do you have fulfillment centers in all those places?

Frank: Yes, local fulfillment. We have a lot of warehouses. We have two primary ones in the U.S., and then one in each market — Canada, U.K., E.U. We have a customization warehouse in the U.S. for customers who want their name engraved on their wallet or whatever. Then we’re on Amazon in all those markets, using Fulfillment by Amazon. So we’re probably sending products to 10 to 11 places.

Bandholz: We’ve talked about reaching $100 million. What’s happens after that?

Frank: If I could tell you my dream, it would be for Yeti to buy us as a strategic acquisition. We do digital better than them. They’re a big company — billions of dollars in revenue, but Covid exposed them. Two-thirds of their revenue happens in person. I think we’d really add a lot of insight into what they’re doing. That’s my dream.

I’m wary of an IPO. I’ve had friends who’ve taken companies public, and they said it’s the worst experience ever. I don’t think any of us at The Ridge is up for it. If we can have a $100 million per year company with a $20 million EBITDA, that’s a strong business to hold on to.

Bandholz: You could live a good life making that kind of money. Although some would say making more than $200,000 a year doesn’t improve the happiness quotient.

Frank: Yes, all of The Ridge’s owners are down to earth. All of our lives would get worse with more money. I honestly believe that.

Bandholz: Let’s talk about Amazon. How it’s working for you?

Frank: You were ahead of the curve at Beardbrand talking about the evils of Amazon from a merchant standpoint. If you are a branded product, Amazon is a double-edged sword. Amazon doesn’t do a good job conveying brand value. And it forces you to compete with subpar goods, which is a huge issue for us. There is a bunch of knock-offs to our products on Amazon. Our Amazon business was eight figures in 2020. But other sellers there are violating our patent. When we go after those people, Amazon is not the best partner.

With Amazon, you’re paying for an expensive warehouse. When Covid hit, Amazon restricted inventory levels and pushed our shipment days from two days to four weeks. It feels like a multi-level marketing scheme with the ad budgets they require.

Those are some of our problems with Amazon. We’re going to continue on that platform, but a big focus for us isn’t growing Amazon. If you’re a DTC brand or a superior good, focusing on growing Amazon is not the right thing to do.

Bandholz: How can our listeners learn more about you and reach out?

Frank: Hit me up on LinkedIn — @seandavidfrank. Our website is RidgeWallet.com.

What Saul Bass Can Teach Us About Web Design