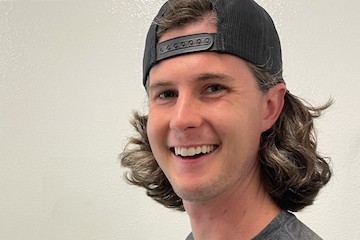 Solving a personal hardship may be the most common motivator for starting a business. Felipe Correa launched Goodspread when he couldn’t find suitable remedies for his eczema. Shreya Patel founded Hyve to address her need for toxic-free household cleaning goods.

Clark Nowlin’s hardship was acidity in coffee. He told me, “I used to be a full-time touring musician, playing in rock bands, drinking rural gas station coffee or Starbucks. It wrecked my stomach. It was because of coffee’s acidity.”

Golden Ratio Coffee is Nowlin’s solution. It’s a producer of low-acid coffee. He founded the business last year in Austin, Texas, and it now sells direct-to-consumer in all 50 states.

He and I recently discussed the company’s launch, raising money, growth plans, and more.

Embedded below is our entire audio conversation. The ensuing transcript is edited for length and clarity.

Clark Nowlin: Yes. We did not make up the golden ratio. We just apply it to our products. We want to be the golden ratio between you, your morning, and your caffeine. Listeners should search Google for “golden ratio.” It’s a beautiful natural aesthetic, the number is 1.610803, repeating.

If you plot it, it makes a beautiful spiral. It’s a natural phenomenon. We are grateful that golden ratio, the phrase, was available for us to name the company.

Bandholz: You make Golden Ratio Coffee. It’s a lightly roasted coffee in tea bags. It doesn’t have the same acidity as traditional coffee, but it’s not weak, either. Walk me through how you came up with the brand and the process.

Nowlin: It helped that we could start with a naturally beautiful aesthetic. Most people that know about the golden ratio are architects or photographers. We are grateful to have started with a blank canvas to create our brand around. Our packaging uses variations of different circles. It was inspired by what the golden ratio already is.

Our brand was born out of a desire to help people feel good. I had trouble drinking regular coffee. I used to be a full-time touring musician, playing in rock bands, drinking rural gas station coffee, or Starbucks. It wrecked my stomach. I had to stop drinking coffee altogether. It was because of coffee’s acidity.

I then discovered a popular, low-roast coffee in the Pacific Northwest. It didn’t hurt my stomach. But outside of Seattle, no one had heard of it. So that was my call to entrepreneurship.

I started the brand to give folks access to low-roast coffee because it solved a big problem for me, and I thought it would help others, too.

Bandholz: When I lived in Spokane, Washington, my business partner told me about the brand you mentioned. She called it white coffee. That was 2011, 2012. You’ve greatly expanded that market. Why use tea bags versus traditional ground coffee?

Nowlin: We asked ourselves, “Do we just sell ground beans, cans of coffee, or wholesale to coffee shops?” We found the tea bag format interesting. Initially we cold brewed it, and the tea bags were amazing for that because you don’t need additional equipment — just need water and time.

So that’s why we picked the tea bag, for ease of use. We also had accessed focus groups for feedback. One of our investors, Noah Kagan, who lives here in Austin, told us, “You can come to our office and give our employees free coffee. We’ll give feedback.”

Some folks thought our coffee tasted like tea. So we needed to know if it was coffee for tea people or tea for coffee people.

We learned that from a packaging perspective, it didn’t matter. People associated us with tea. So if we put it in a format that was more like tea, the adoption would be easier. When we presented it as ground coffee, one in six people in the focus groups said, “I hate this!”

We put the same product in a tea bag, and zero out of 100 people hated it.

We made it very simple with the tea bag. However, we’re launching our ground coffee bags in November. We’ll see how that goes. We’ve had roughly 11,000 people opt-in to receive it. We might find out in six months that the whole tea bag thing was just a waste of time.

Bandholz: So you’ve been in business for about a year. You sell direct-to-consumer and advertise on Facebook.

Bandholz: What is the long-term vision? Will you stay direct-to-consumer or expand into other channels?

Nowlin: We definitely have the vision to be in multiple channels. In 10 years I could see us in every type of channel, even a ready-to-drink version.

But at the beginning, we’re focusing on that one thing. We’re selling in all 50 states now. We could make a can or sell ground beans or whole beans. We could venture into pour-over stuff. Before you know, we’d have a lot of SKUs. We’re not big enough to justify that much product and operational muscle.

Bandholz: You’re wise beyond your years. Beardbrand made all of the mistakes you’ve just described. We were trying to do everything for everyone. We had European fulfillment, for example. The deeper penetration you can get with limited SKUs, the better.

Nowlin: For sure. But it’s easy to fall into an entrepreneurial trap of making a bunch of new stuff. It’s fun to make stuff. But you launch 10 things at once, and you’re surely not going to have any meaningful marketing penetration if you’re constrained by resources, which we are.

Bandholz: Let’s go back to your early days, attracting investors.

Nowlin: When it comes to raising capital, investors want to provide gasoline money to take your car to the next location. That’s not very useful if you do not have direction.

I didn’t want to take outside money until I felt confident we could deliver it back in multiples to the investors who gave it to us. Also, I had taken a lot of risks by starting the business without any outside money.

I was fortunate I had a financial runway from my last job. When that ended, I took all my chips and put them in this business. So I drained my savings to get all the products developed and put the core team together. I could then present it to an investor and say, “This is real. It’s going to be in tens of thousands of homes in the next year.”

That helped us raise capital because investors could see the impact happening quickly. The speed at which we could bring in money was due to having already spent a lot of money. I had taken the risk. I’m still our company’s largest investor.

Bandholz: So you had the brand built and the products researched and developed.

Nowlin: That’s right. We hadn’t sold anything yet, but we had set up the supply chain and developed the products, including early prototypes.

We needed investors to meet the minimum order quantities at our supplier. I could not do that on my 401(k) budget. Fortunately, investors responded.

Bandholz: How did you find them?

Nowlin: Austin is a very entrepreneurial community. Several of our initial investors were successful business people I’d known for 3, 5 years. It was angel investing.

It’s better to bring in money when you’re not held to the numbers. You get people excited about the vision. Otherwise, you’re accountable for actual revenue growth. So the timing is important. Wait too long, and if you don’t have great numbers, it’s much harder to raise capital.

We brought in some investors out of necessity before we had customers. Fortunately, the numbers were good after the launch — roughly 40% month-over-month growth. That helped us bring in more money. We’re now 15 months in and haven’t needed more capital.

Bandholz: Walk me through your growth strategy. Doing it on Facebook for the past year has been difficult.

Nowlin: The lesson for us is to sell more expensive products. It doesn’t matter what you’re selling. The cost per acquisition on Facebook is likely $50 or more. Back in 2017, $8 CPAs on Facebook were common, but not today.

The good news for us is we have a healthy reorder rate. It’s kept our business alive. One in five customers that come from Facebook ads reorder. So that’s how we can afford the $50 CPA or $75 or even $100. The lifetime value of those customers is hundreds of dollars, not $30.

Also, we’ve started our foodservice business. There are several coffee shops in Austin that sell Golden Ratio Coffee. That’s an exciting way to get people exposed to our brand without paying Facebook $50 to try it.

We have a corporate gifting program as well. We have several companies who buy for customers and employees. It helps that our tea bags are easy to mail — just put one in a regular envelope.

Bandholz: Where can people learn more about you and support your company?

Fragrance One Co-founder on Selling without Smelling

How to Track Profit from Products, Customers

6 Things to Do before Selling an Ecommerce Business

The benefits of a thriving consumer forum

The Beauty of Bootstrapping a Business
0 replies

How To Build A Real-Time Multi-User Game From Scratch